Mayor of the County of Cork, Cllr Danny Collins is welcoming the appointment of BAM Ireland and Atkins to deliver the Water-Rock LIHAF Initiative Infrastructure Works near Midleton. 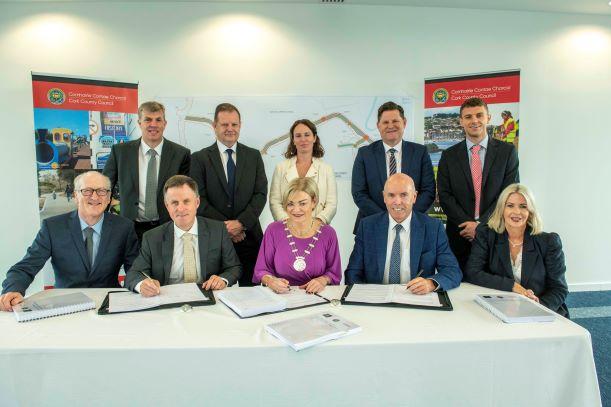 Water-Rock has been identified as a Major Urban Housing Development Site as part of the County Metropolitan Planned Urban Expansion.  The site, consisting of 160 hectares, has been zoned to provide a mixed use development in three phases which will eventually include 2,500 residential units, three schools, a neighbourhood centre, a railway station and parks.

The appointment of BAM Ireland in the development of Water Rock will include the construction of approximately 1.2 km of a single carriageway link road and approximately 300m of adjoining single carriageway roads. The roads will include a surface water drainage and attenuation system, upgrading of the existing Cork-Midleton/ Midleton Northern Relief Road junction, services, public lighting, and landscaping.

This is great news for East Cork and another example of government investment in Cork County yielding significant dividends.  There is long term potential to deliver 2,500 housing units in Water-Rock including social and reduced-price housing providing a positive outlook for prospective house buyers in difficult times. This will also give a significant boost to the local economy over the next 15 months. Cork County Council has invested significant preparatory work to bring this infrastructure project from planning to construction and on behalf of Council I look forward now to BAM delivering these works, valued at €7.3m, and ultimately paving the way for the commencement of housing.

Alasdair Henderson, Executive Director, BAM Ireland commented, “We are delighted to have been chosen to deliver this vital infrastructure project that will enable the development of essential housing and commercial premises in the Water-Rock community. BAM have committed to delivering social value by employing local people and investing in a locally based supply chain. A sustainable approach to delivery will also include focus on logistics optimisation and material re-use.”

Atkins was initially appointed by Cork County Council in 2018 and has taken the Water Rock LIHAF Initiative Infrastructure project from initial feasibility stage through planning and design up to construction, which is expected to be completed before the end of 2023.

Atkins Technical Director Richard Neuling said: “The infrastructure being put into place will open up and transform the Water Rock Urban Expansion Area, which is crucial for Cork as it looks to meet ambitious housing targets. We now look forward to overseeing the completion of a project we’ve been involved in for a number of years, working closely alongside Cork County Council.”

The Water-Rock development is a strategically important project for Midleton and the East Cork area. Cork County Council has worked proactively over an extended period with landowners, government agencies and the Department of Housing, Local Government and Heritage using LIHAF funding to deliver this substantial infrastructure project, providing new roads and services valued at €7.3m. The continued future long-term strength of the Cork economy is dependent on projects such as this.  Projects which provide certainty on the delivery of infrastructure to support the development of housing and which will contribute to the implementation of the Cork County Development Plan 2022-2028, and Government Policy as regards the National Planning Framework and Housing For All.