The video provider requires that you accept marketing and statistics cookies in order to view this video.

Even the most profound influences covering the Civil War period are continually adapting to change with the discovery of new material.

Family artefacts such as diaries, letters etc when unearthed combined with the latest digital technology are reawakening and changing our thinking of past events.

None more so than that period leading up to the centenary of the last journey of Michael Collins on 22 August 1922, with the consequences reverberating throughout the island of Ireland.

The paradox of events that happened a century ago and interpreting these in the context of today’s digital world is indeed a challenge. Béal na Bláth certainly falls into this category where the rural environment and geography includes a monument of national importance commemorating Michael Collins, who is one of Ireland’s most significant historical figures, known both nationally and internationally.

Digital technologies enable us to see into the occurrences at Béal na Bláth one hundred years ago. Combined with this expertise and knowledge from historians and archaeologists we can become immersed in the history experience. This is not about treating a commemorative object with undue veneration but celebrating the life and achievements of Michael Collins during his short life.

The project has seen the site of the Michael Collins ambush refurbished in the most sensitive and appropriate manner ahead of the centenary of his death in August.  This newly renovated monument puts us in touch directly with the historic events that occurred within this location in this centenary year. Studying the wider context of this memorial discloses a story which is the account of the life and death of Michael Collins.

The monument has provided a challenge to the creativity of the professionals involved in Cork County Council to encapsulate, redesign, and refurbish at the same time, making it more accessible to visitors. 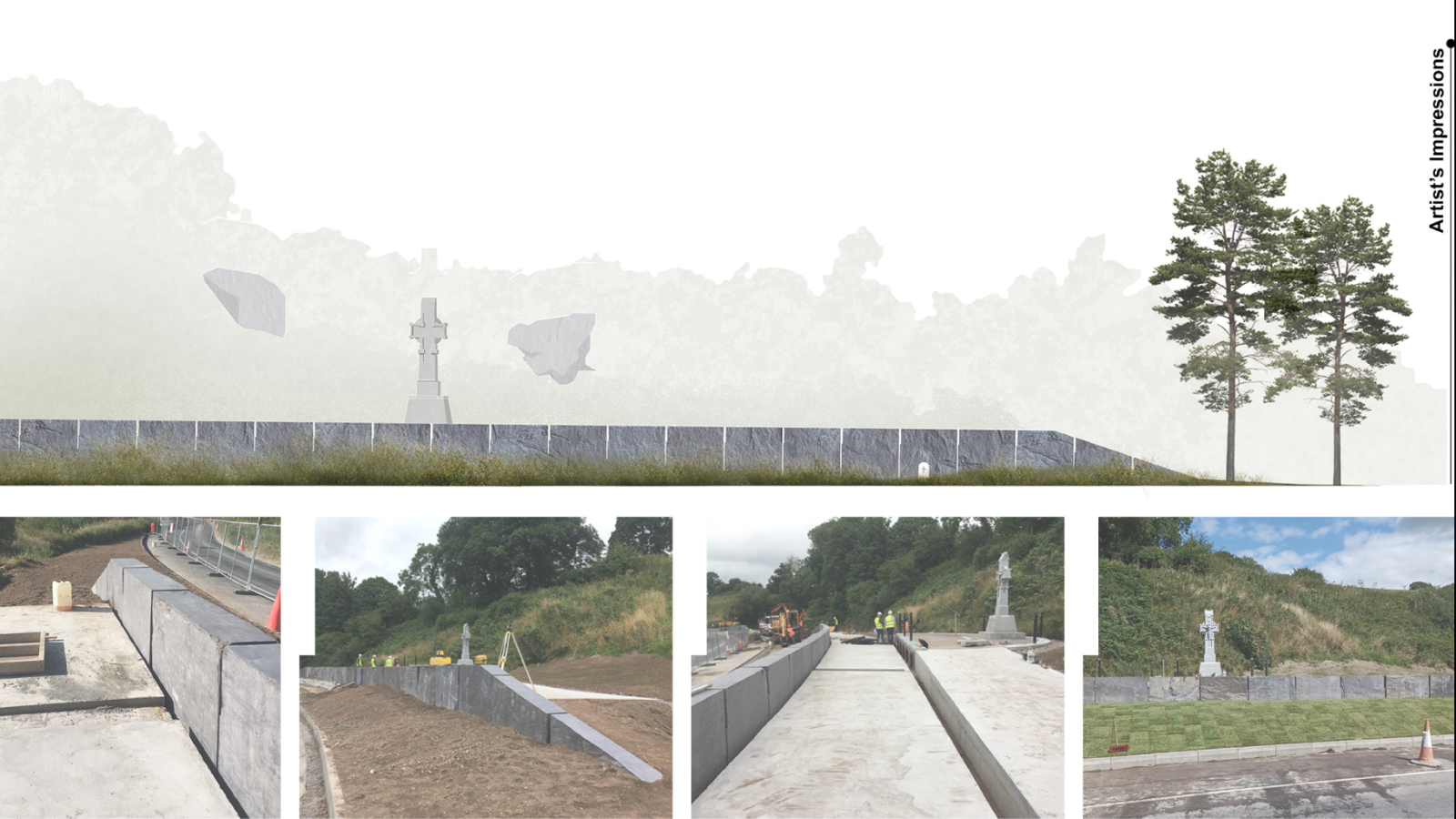 Sensitive development at the monument site will ensure its universal accessibility and will allow the visitor an opportunity to experience the landscape and garnish an impression of what it was like in 1922, when that fateful ambush took place. This will also ensure that Collins’ legacy will continue for future generations.

The overall visitor experience will be enriched by the availability of a map guide of the site and wider ambush area.  Welcoming the project, the Mayor of the County of Cork, Cllr. Danny Collins said,

“The commitment of all the partners is evident through the funding and expertise brought to this project, ensuring the restoration of the landscape affords the appropriate commemoration of the events here in 1922, for the centenary year and for years to come.”

Upgrade works to the site are supported by the Department of the Taoiseach, Department of Defence and Department of Tourism, Culture, Arts, Gaeltacht, Sport, and Media as part of the centenary programme of commemorations. Under the plans, Mayor Collins said the site will be restored to reveal its heritage value “in the most sensitive and appropriate manner, serving as a legacy thereafter of the centenary itself”.

The introduction of traffic calming measures adjacent to the Michael Collins Memorial by the reduction of the carriageway width, renewal of surfacing and road markings, the addition of car parking spaces and associated works will ensure the safety and convenience of visitors.

Originally a small timber cross was placed on the site of the ambush following his death. The limestone cross with its semi-circular plan and distinct edging stones was unveiled by President W.T. Cosgrave in August 1924.

Over time, various alterations and additions were added such as railings and a brick wall. These embellishments were not considered to be particularly sympathetic with the stone cross or the nature of the site. Substantial road widening and realignment has also taken place since 1922 impacting upon the commemoration location.

The new people friendly design necessitated the removal of the 1970s railings due to their enclosed nature, opening up the commemorative area.  Stones of Irish Valentia slate stand as a permanent tribute to the life of Michael Collins and are inscribed with West Cork placenames associated with his early years and his final journey. Access to the limestone cross and its simpler plinth has been improved allowing for more ceremonial possibilities.

The landscape around the monument itself is an imaginative contrast of foliage and local dark red Cork sandstone, where native Scots pine and Yew trees symbolise life after death.  The old white marker still stands near where Collins was mortally wounded.

Just 30km away at Michael Collins’ birthplace his own father John recounted that there were records on his father’s side of ancestors dating back four hundred and fifty years when they were chieftains of Munster, their motto being Multitudinous is their gathering … a great host with whom it is not fortunate to contend … the battle-trooped host of the O’Coileán. These early oral histories of Michael Collins’ father were to remain in his memory and influence him throughout his life.