The UEAs  are large development sites on the edges of existing settlements (except Monard SDZ) which have been identified and reinforced through multiple policy processes, stemming from the Cork Area Strategic Plan 2001, as the best locations for the development of new communities in Metropolitan Cork. The UEAs maximise potential along the rail corridor and are essential to providing the critical mass for the progression of our overall public transport network. 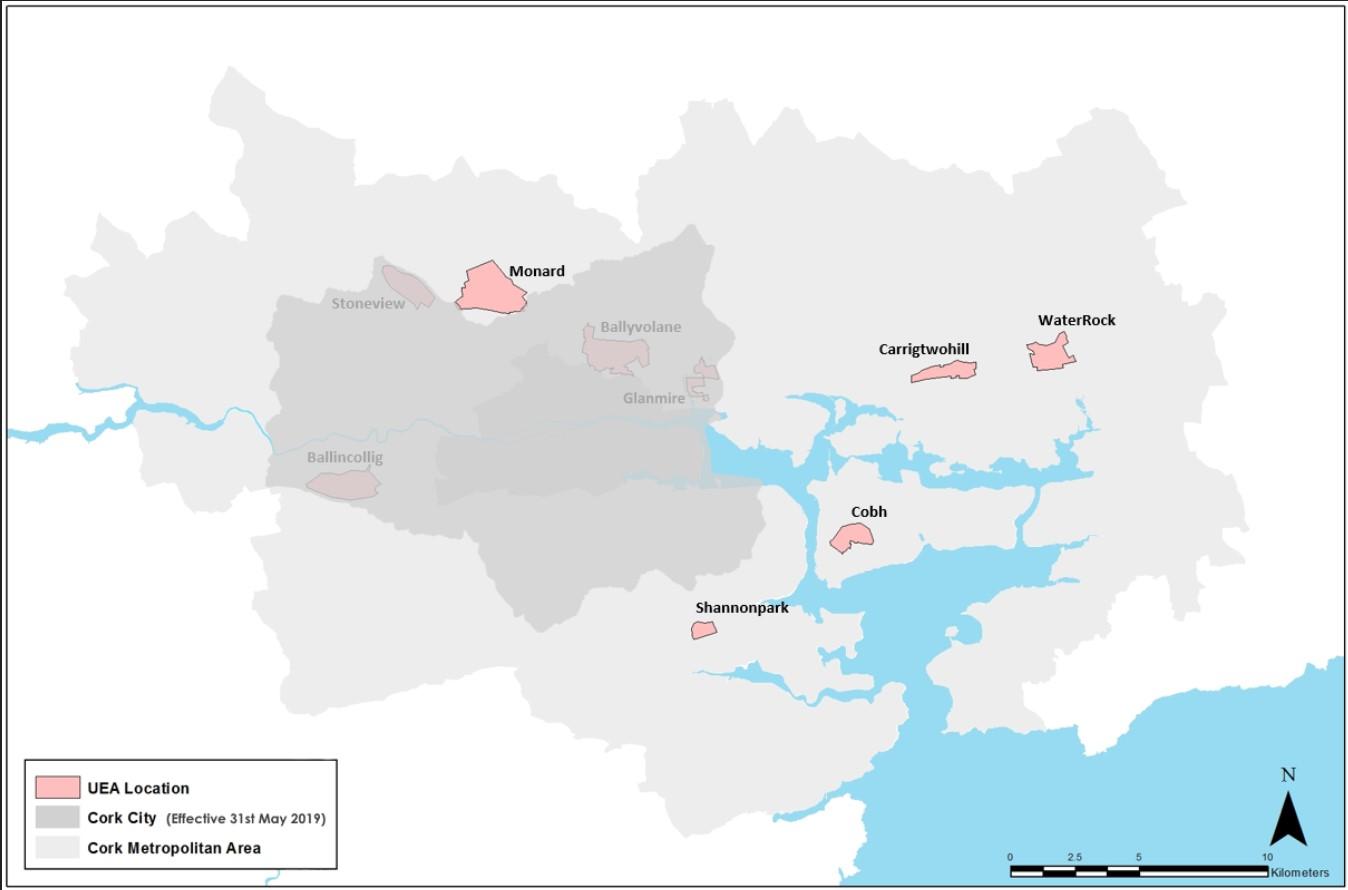 Originally designated as Strategic Policy Areas, the Electoral Area Local Area Plans in 2011 made provision for the preparation of Framework Masterplans on these sites which have been incorporated into the relevant Municipal District Local Area Plans 2017 and divided into smaller zonings for each site or UEA as it is now known. You can read about the policy for each UEA in the relevant Local Area Plan.

Relevant Local Area Plans for each UEA are as follows:

Now, more than ever, the UEAs are an important component of meeting Cork´s ambitious housing targets as set out in its Core Strategy in the Cork County Development Plan 2014

The key to delivering housing on the UEAs is providing the necessary roads and water infrastructure to open up the lands and facilitate their development.

At the beginning of 2017, Cork County Council’s Housing Infrastructure Implementation Team set about applying for funding under the Government´s Local Infrastructure Housing Activation Fund (LIHAF) as part of the Rebuilding Ireland Initiative for the provision of strategic infrastructure to unlock large development sites for 200+ units.

Cork County Council was granted €20.4 million in funding to provide strategic infrastructure for 4 sites in March 2017, namely, Shannonpark, Ballinglanna, Water-Rock and Ballincollig. Both Ballinglanna & Ballincollig UEA’s have been designated to be within the new city boundary from June 2019 and have been transferred to Cork City Council’s jurisdiction. Cork County Council is continuing to progress the Shannonpark & Water-Rock projects.

In January 2019, Cork County Council applied for and secured funding under the Urban Regeneration and Development Fund (URDF) to examine and progress the Carrigtwohill North UEA.

Both Carrigtwohill North and Water-Rock UEA’s are HIIT’s priorities for 2020.

Shannonpark is a mixed use site located on the northern periphery of the town. It will include phased development for up to 1,200 residential units. Cork County Council was granted €0.6 million in 2017 through LIHAF for road improvements to be made to the N28, including upgrade of Shannonpark Roundabout. It is envisaged that the works carried out under the LIHAF project will facilitate the delivery of 400 residential units by 2021, with an additional 800 units to be delivered by 2029. You may view the most up-to-date information on the Shannonpark site via the LIHAF Story Maps.

The Water-Rock Urban Expansion Area (UEA) comprises a 160ha site to the northwest of Midleton town just south of the Water-Rock golf-course adjoining the Midleton railway line. It is an objective of the Council to develop the UEA for a range of uses including approximately 2,500 residential units, school sites, a neighbourhood centre, parks, a greenway, a railway station and business uses through phased development. The full policy background, maps, zoning objectives and associated infrastructure packages can be found in the East Cork Municipal District LAP 2017 pg. 57-75 Cork Local Area Plans.

The Water-Rock UEA has been activated through the Government’s Local Infrastructure Housing Activation Fund (LIHAF) as part of Pillar 3 of the Rebuilding Ireland LIHAF Initiative announced in March 2016. Cork County Council was granted €5.5 million through LIHAF for the provision of certain strategic infrastructure in order to activate the Water-Rock UEA which comprises mostly on-site infrastructure (spine road, drainage, traffic management measures between N25/Water-Rock) but also an upgrade to the Knockgriffin junction to the south of the site.  Additional infrastructure not funded by LIHAF is also to be delivered as per the on and off-site infrastructure programmes outlined in the Local Area Plan to facilitate the development of individual phases of the UEA construction.

Cork County Council appointed Design Consultants to progress the design for the Water-Rock UEA Infrastructure Works in February 2018. In March 2019, the project received Part 8 planning approval. The Water Rock UEA Infrastructure Works comprises of eight infrastructure projects including all of the infrastructure projects identified in the East Cork LAP as being required to facilitate the development of Phase 1 of the UEA as well as a number of key pieces of infrastructure required for later phases, see both the Water-Rock Strategic Transport Assessment and Water-Rock Strategic Transport Assessment - Addendum Report. The project is
currently going through detailed design and it is hoped construction will commence on site in Q4, 2020. You may view the most up-to-date information on the Water-Rock site via the LIHAF Story Maps.

In 2019, Cork County Council received €750,000 under the Urban Regeneration & Development Fund (URDF) to design a scheme to facilitate the development of Carrigtwohill North UEA. Carrigtwohill UEA comprises a 100ha site to the north of Carrigtwohill town adjoining the Midleton railway line. It is an objective of the council to develop the UEA for a range of uses including approximately 3,500 residential units, school sites, a neighbourhood centre, parks, greenways and business uses through a phased development. The full policy background, maps, zoning objectives and associated infrastructure packages can be found in the Cobh Municipal District LAP 2017 pg. 125-149 Cork Local Area Plans.

Cork County Council appointed Design Consultants in December 2019 to progress the design for Carrigtwohill North UEA infrastructural works. The project will comprise two elements: (1) upgrading & improving the current public realm within the town centre, & (2) determining proposed infrastructural works required within the UEA designated lands. It is anticipated that preliminary design will be completed by Q3, 2020 allowing Cork County Council seek Part 8 planning approval for both elements in the later half of 2020.