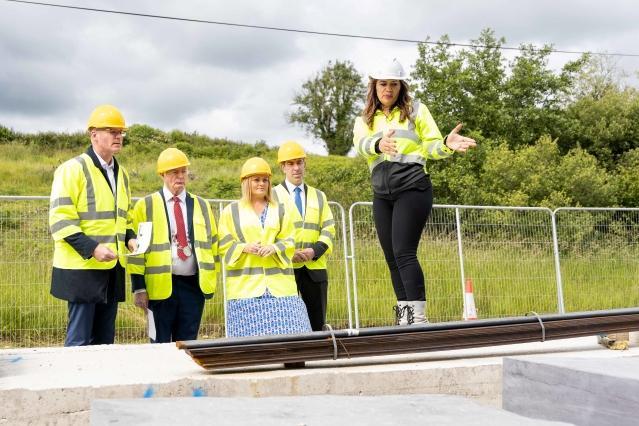 Cllr Michael Creed, Deputising for the Mayor of the County of Cork welcomed Minister for Defence, Simon Coveney to Béal na Bláth in County Cork to see the works which have taken place to date and those that are planned at the memorial in advance of the centenary commemoration.

The project will see the site of the Michael Collins ambush restored in the most sensitive and appropriate manner ahead of the centenary of his death in August. It is a partnership between Cork County Council and the Department of An Taoiseach, Department of Defence and Department of Tourism, Culture, Arts, Gaeltacht, Sport and Media.

The works will make the area more visitor-friendly and include narrowing the road, resurfacing, additional parking spaces as well as information maps and guides. The project will also serve as a legacy for the centenary itself.

The Mayor of the County of Cork, Cllr Danny Collins said, “Béal na Bláth is a site of national historical importance and it is fitting that it is restored ahead of the centenary of Michael Collins’ death on August 22nd. The works will give visitors a chance to experience what the landscape was like in 1922 when the ambush took place. It is also about creating a lasting legacy for future generations.”

Minister for Defence, Simon Coveney added, “Michael Collins was one of the most important figures in the foundation of our state. It is an honour to be here today to see work underway on The Michael Collins Centenary Project. I would like to pay tribute to all those who collaborated on this project in particular Cork County Council and the Michael Collins Béal na Bláth Commemoration Committee.”

The main commemorative event will take place at Béal na Bláth at 3.00 pm on Sunday, August 21st 2022. The event is being organised by the Michael Collins Béal na Bláth Commemoration Committee and further details will be publicised at a later date.